“GET” and The House Of Commons Gym Part 3

In Memory Of M.E. Patient

From The Nurse Point of View

I will point out again like I have before, remember, I’m coming from an R.N. point of view for the benefit of the patients because I was an active R.N. until I was no longer able to work because of M.E.

I actually couldn’t respond from a patient point of view because I would lose focus on the subject, and I would end up sounding more like an angry patient than a nurse who is very disappointed because of the lack of the standard of patient care in regards to this illness.

How Do the Readers Know that The Nurse Point of View For This Particular Blog Post They Are Reading Here  Is Actually Correct?

If you are reading this blog for the first time, I was actually an active Registered Nurse in New York City, before I became too ill with M.E. to no longer work. Those who know me, know that to be true.

One of my specialty areas was Cardiac. I worked in the Cardiac Care Unit of the medical center in New York City, which is featured in the YouTube video below of a current TV program. There are no actors in the video and everything filmed were actual events 2 years ago, while they were filming to make the program. This video would pretty much give you an idea of how busy any of the ICU’s was in that type of medical center, including the CCU where I worked.

I was also a Cardiac Rehab nurse in 2 different centers in New York City as well.

The hospital is New York Presbyterian Hospital (known as New York Hospital/Cornell Medical Center when I worked there), which has always been in the top 10 hospitals in the US for Cardiac Care and Surgery. You can read information about their Cardiology department here , so you can decide whether or not I actually know what I am talking about.

What actually happened to Brynmor John?

Why did this not have to happen?

Why was the doctor recommendation or prescription wrong?

Why was this actually wrongful death and negligent malpractice?

On The Scene Cardiac Arrest Event

Before I answer those questions, which I will start to do in Part 4, I wanted to find a video on YouTube so you can see an actual demonstration on the scene of a cardiac arrest response from the emergency services.

In the entirety of this blog post, I feel that everyone must know the different aspects of Brynmor John’s case in order to understand the potentially lethal treatment recommendations that Brynmor John’s doctor prescribed him, which includes the scene from the Emergency Services video, so you can see why Brynmor John could not be successfully resuscitated. This is so everyone can see just how serious this unethical treatment protocol is.

It took a little while to find an older version of the video  below, because I want you to see what the realistic version for 1988 would be, which happens to be the year Brynmor John died.

The reason being is that the CPR protocol was different in 1988 than it is now. BCLS or Basic Cardiac Life Support is revised each year in order to increase the survival rate. If you happen to know what the current CPR protocol is, you can see that it is an older protocol or obviously slower than what the protocol is today.

Before I show you the video, I have to explain why the defibrillator would be important!

Why would the defibrillator be important?

If you take a look at that link above about where I found when defibrillators were originally in the ambulances in London, you will read that most cardiac arrests occur outside of the hospital.
Professor Frank Pantridge who along with Dr. Geddes of the Royal Victoria Hospital of Belfast, who actually produced the first portable defibrillator in 1964, and who was referred to as “The Father Of Emergency Medicine” or “Grandfather of Prehospital ALS or Advanced Life Support” believed that “immediate correction of v-fib should be done at the scene of the event“, which we know to be true in the hospital as well. 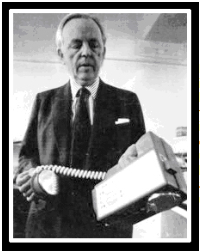 V-Fib is Ventricular Fibrillation, which is a lethal cardiac arrhythmia during cardiac arrest.  If you are not resuscitated from “V-fib” with a defibrillator, you will die.

A Normal EKG or what is called “Normal Sinus Rhythm” looks like this:

When someone goes into Cardiac Arrest, every second makes a difference because oxygen is not getting to the brain via the pumping of the heart. You only have minutes to save the patient before brain death occurs. The longer you wait to do cardioversion or “shock” the patient with the defibrillator to shock the heart back into a normal sinus rhythm the chances of saving that patient are less to none.

Here is information from the American Heart Association About CPR. You never know, you may be the one who saves your loved ones life because you knew how to do CPR!

Video of an actual  On the Scene Cardiac Arrest Event:

This video was actually done in Chicago in 1994 by the Chicago Fire Department Emergency services, where they responded to a call for someone who was found unresponsive, in cardiac arrest.

As you know, you can see the timer on the bottom right of the video. It takes the EMS over a minute to get there. This was probably the case when the EMS responded to the scene where Brynmor John was or depending on how far away the EMS was from Brynmor John’s location, which was the House Of Commons Gym.

If you notice, one of the firemen is doing CPR, another is providing the airway or breathing for the patient, that bag he is holding is called an ambu-bag. Another fireman is charging the defibrillator which is the portable machine that have wires which are connected to those paddles he is holding that he is going to put on the man’s chest to try to defibrillate the patient. The EMS people who responded to the scene where Brynmor John was did NOT have a defibrillator because the year was 1988. Remember, ambulances in England did not have defibrillators until 1990.

If you see the screen on the cardiac monitor, the black screen with the wavy line. You don’t see the “Normal Sinus Rhythm” that is in the EKG example above. The man didn’t respond.  The protocol is to shock the patient 3 times in a row.  It looks like the video was probably edited. You only see them shocking the patient one time, and then the video shows the cardiac monitor, which shows that the man didn’t respond. Sometime during that response, they did put an IV to give the patient emergency drugs. 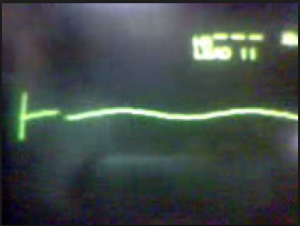 The flat or almost flat wavy line is called Asystole or complete cardiac standstill or arrest. That man did not respond. The EMS from the fire department put him in the ambulance to bring him to the hospital because the doctor in the emergency room would be the one to pronounce the patient deceased at that point.

Usually, when they remove the cardiac arrest patient from the ambulance, the emergency room doctors and nurses would’ve been out there waiting. They would be moving much quicker to get the patient inside to the emergency room if they were expecting to receive a patient, which they would’ve known ahead of time that responded to the Advance Cardiac Life Support, which was administered by the fire department emergency services.

As you can see in that video, there were no doctors and nurses waiting outside. They already knew ahead of time what the condition of the patient was because the EMS, which were the firemen in that video who radioed ahead to let the hospital know that they were bringing this man who would be “DOA” which means “Dead On Arrival.”

That man did not survive!

The fireman was doing CPR while they were bringing the patient on the stretcher into the emergency room because he was not officially pronounced deceased if you are wondering why the fireman is doing that. Only the doctor can do that, so the fireman or paramedic has to keep doing CPR until the doctor pronounces that the patient is deceased.

What you just saw was the same type of scenario that happened to Brynmor John after he went into cardiac arrest, while he was walking through the doors of the House of Commons Gym to go home.

We know that Brynmor John didn’t make it like the man in the video did not make it.

Brynmor John died December 18th, 1988 after exercising in the House of Commons Gym as per his doctor recommendations or as prescribed by his doctor Malcolm Hooper stated in “Magical Medicine:”

“Brynmor John suddenly collapsed and died as he was leaving the House of Commons gym after having been advised to exercise back to fitness.”

About The Other Side Of The Stretcher